Give Us This Day Our PBJ

I’ve lost track of the number of times I’ve seen those words printed in bold letters on a neon yellow wristband. Yes, my mom is at risk of falling. Most people with partial lower body paralysis are, but does she really need a new fall risk band every single time she passes through the sliding glass doors of the hospital? The wheelchair should scream, “fall risk,” much louder than any piece of fluorescent plastic, shouldn’t it?

Still, there’s no getting around it. Every hospital visit, the fall risk band goes on with at least two or three others, each sporting it’s own bright primary color. I’ve threatened to start collecting them. I’ve often thought that they’d make a very festive Christmas tree garland, but somehow Mom doesn’t think so. Hmm, I can’t imagine why…

Yes, I know it’s a ludicrous idea to decorate the Christmas tree with fall risk bands, but I keep bringing up the idea anyway. It’s my attempt at keeping things light as they prep my mom for whatever surgical procedure the doctors have concocted next. I want the pre-surgical banter to stay nice and frivolous, but there’s no denying that, deep down, we’re both thinking about what’s coming next.

Surgery is a horribly unpleasant thing in and of itself, but there’s always something more, too. Lurking in the back of our minds, there’s an understanding of the risks. Once you go under, there’s always a chance that you won’t wake up.

More meaningful topics always creep into our conversation. After all, it’s only natural that these experiences should inspire some introspection. One’s mortality suddenly seems so much more real when a tech comes and inserts a needle into a pulsating blue vein.

Mom, like everyone else on this planet, has some regrets. They’re nothing criminal in nature, mind you, but there are things that she’d do differently if she could do them over again. But that’s okay. Like I always say, we all make mistakes. We all stumble and fall.

If there’s one thing I’ve learned while reading my Bible, it’s that every single human being has screwed up. All have sinned and fallen short of the glory of God (Romans 3:23). We’re imperfect, flawed creatures. Despite our best intentions, we always mess up. No one but Christ was perfect. The rest of us are “fall risks.”

One day, as I sat beside my mom’s gurney waiting for them to wheel her away, my eyes just sort of locked on that yellow wristband. Our last conversation kept replaying in my head. I’d reminded Mom that her sins were forgiven. We all stumble and fall, but Christ paid the penalty. Death has lost its sting. Then silence… so I just kept staring at that bright yellow band.

I’ve read, I don’t know how many times, that “while we were still sinners, Christ died for us” (Romans 5:8), but somehow it was always hard to fully grasp. Then suddenly, as I stared at that wristband, I realized something. Our flaws were all glaringly visible to Christ before he died for us. He didn’t need a neon yellow sign to tell him that we would mess up. All our falls, past, present, and future, were just as obvious to God as my mom’s wheelchair is to any doc with eyes. But Christ died to save us anyway, even though he knew we were imperfect, even though he knew we’d screw up.

He sees our failures, just like he saw Peter’s. Jesus knew the Apostle Peter would deny him three times long before the denials took place. Our God is the God of the past, present, and future, after all, and all our days were written in his book before one of them began (Psalm 139:16). And yet, even knowing what the future held, Christ called Peter his “Rock,” the solid foundation upon which he would build the Church.

God sees our mistakes, but he loves and cherishes us anyway. We all have sinned, but here’s the most amazing thing. In the end, it really doesn’t matter how many times we fall. As Peter (repeatedly) demonstrated, walking with God isn’t about never falling down… It’s what we do when Christ whispers our name and says, “Come follow me.”

We are all “fall risks” but that doesn’t really matter. Jesus still thought we were worth dying for. That’s unconditional love that’s out of this world, and it’s a love that gives me the strength to keep getting up. 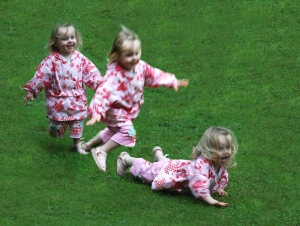 Thank you for reading. May God bless you on your own journey, and remember, it’s not about the number of times you fall. What matters is how many times you choose to get back up.

20 thoughts on “Fall Risk: The Truth about Failure, Forgiveness, and Walking with Christ”

Dish It Out Cancel reply

Follow Give Us This Day Our PBJ on WordPress.com