Give Us This Day Our PBJ

Pixar’s latest movie, Inside Out, doesn’t just give us the opportunity to talk to kids about their emotions.

It can also help us talk to them about Christ. How is that, you ask? Well, surprisingly, one of the main characters is a lot like Christ. No, really. Maybe you missed it if you’ve seen the movie, but the similarities are there. Trust me, and read on.

Now, if you haven’t seen the movie, let me just warn you that this will contain a few spoilers!

But before we get to those, let me introduce you to Riley, the central character in this film. Riley’s an eleven-year-old girl who’s trying to adjust to her new life in San Francisco. Of course, getting use to city life is easier said than done, considering she’s moved away from friends, a familiar school, her much loved junior hockey team, and, well, winter. Yeah, she’s lived her entire life in rural Minnesota… until now. Needless to say, things don’t exactly go smoothly for Riley or her family.

Helping Riley navigate this storm are Riley’s emotions, portrayed as five colorful characters that live and work in “Headquarters,” or the main control center in Riley’s brain. Things go from bad to worse for Riley when Joy and Sadness accidentally leave Headquarters and get lost in the labyrinth of Riley’s long term memory (leaving Fear, Disgust, and Anger in charge!). Until Joy and Sadness can get back to Headquarters, Riley won’t be able to feel either emotion. 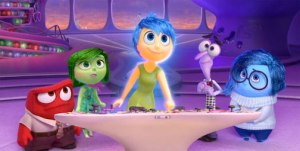 As Joy and Sadness wander in long term memory, they run into Bing Bong, Riley’s all but forgotten imaginary friend. Riley doesn’t play with Bing Bong anymore, but, once upon a time, Riley and he were very close friends.

Even though Riley doesn’t think about him anymore, Bing Bong still loves her with all his heart. He’s even holding out hope that someday they’ll take that trip to the moon that they’d been planning. He’s faithfully preserved their music-powered rocket ship (which more closely resembles a little red wagon with broomstick nacelles) just in case she decides someday to go on that trip.

Bing Bong realizes that Riley’s in deep trouble. After all, she can’t go on living without two of her primary emotions. He quickly decides to help Joy and Sadness get back to Headquarters.

He’s just a cotton candy/elephant/kitten/dolphin imaginary friend, but if he can do anything to help Riley, he will. And believe me, he does.

Unfortunately the trip back to Headquarters doesn’t go as planned. I don’t want to give too much away, but an accident sends Joy and Bing Bong plummeting into the deep dark pit that is Riley’s “Memory Dumb.” This is where things go to be forgotten, and neither Joy nor Bing Bong will survive for long in this black wasteland of faded memories. After a few seconds, we see several memories disintegrate into dust, and then Bing Bong’s left arm begins to slowly fade.

Things don’t look too good, but suddenly Joy gets an idea. She remembers that the rocket ship was pushed into the Memory Dump as well, and it just might be able to launch them out of the pit and back to safety.

But there’s a problem. In the end, the rocket ship doesn’t have enough power left of save them both. Each time they climb onto the ship and rocket skyward, they almost get to the top of the cliff and out of the Memory Dump… but then they run out of power and plummet back into the abyss.

Bing Bong realizes that he and Joy are running out of time, so he makes a choice.

He climbs onto the rocket behind Joy one more time, but, as the rocket picks up speed, Bing Bong jumps off without Joy even realizing what he’s done. Without his extra weight, the rocket has enough power to safely make it over the edge of the cliff before it crash lands, smashes to pieces.

At first, Joy thinks they’ve both made it out, but when she looks around, Bing Bong is nowhere to be seen. Finally, she looks over the side of the cliff into the Memory Dump, and there’s Bing Bong. He’s so faded he’s just barely visible, but Joy can see that he has the biggest smile on his face.

He knows that Joy made it out. Riley will be okay. With his last words, he asks Joy to take care of Riley and to take her to the moon for him. He then disappears forever.

Riley was in trouble, and, to Bing Bong, that was all that mattered. He loved her. No matter what, he was going to do whatever it took to save her, and that’s exactly what he did.

Here, suddenly, we see our first glimpse of how this cotton candy creature is just a bit like Christ, because, of course, Christ died to save us too.

“For God so loved the world that he gave his one and only Son, that whoever believes in him shall not perish but have eternal life.” John 3:16 NIV

What makes the resemblance between Bing Bong and Christ even more interesting is the fact that Riley hadn’t done anything to deserve Bing Bong’s loving sacrifice. In fact, strictly speaking, I’d say she really didn’t deserve that gift. She behaves pretty badly at times during the movie, and remember, she hadn’t even bothered to think about Bing Bong in quite awhile. But none of that mattered to Bing Bong. He loved her no matter what. In spite of everything, he was still willing to pay the ultimate price to save her.

Just as Riley didn’t do anything to deserve Bing Bong’s acts of love, none of us deserve the loving sacrifice Christ made for us.

We all behave badly at times, and all too often we forget about Jesus as we become absorbed in our daily lives. But Jesus didn’t die for us because we deserved it: “But God demonstrates his own love for us in this: While we were still sinners, Christ died for us.” Romans 5:8 NIV

Lastly, there’s one more truly amazing similarity between Jesus and Bing Bong. You see, Jesus didn’t just die to save us from our sins. He came so that we could have life and have it abundantly (see John 10:10). When we accept Christ’s sacrifice and invite him into our lives, his Holy Spirit comes to live inside our hearts. In Galatians 5:22-23, we see that just some of the fruits of having God’s Spirit living inside of us are joy, love, and peace.

In short, Christ sacrificed himself in part to bring us joy.

Perhaps the greatest resemblance between Christ and Bing Bong lies in why Bing Bong sacrificed himself for Riley. Bing Bong didn’t just simply give his life for Riley. He sacrificed himself so that Riley could have Joy. Later, when Joy and Sadness finally do return to Headquarters, Riley is able to reconcile with her parents. They come together as a family. At that point, Riley doesn’t just feel Joy. She also experiences both love and peace.

In a world where movies are more likely to talk about love in terms of waiting for your prince to come, Inside Out is a rare find. It not only shows kids the importance of our emotions in terms they can understand, but it also shows them the truth of this verse:

“There is no greater love than to lay down one’s life for one’s friends.” John 15:13 NLT And that is exactly how much Jesus Christ loves us.

Thanks for reading. For more fun and uplifting articles, visit my blog’s Home page. While you’re there, you can sign up to follow my blog to receive new articles via email as they become available. Up next: a closer look at Wreck-It-Ralph!

Thanks for for stopping by, and God bless!

Finding spiritual themes in mainstream movies is just one way to share our faith with children. I would love to hear of what other fun ways you’re striking up conversations about Jesus. Please feel free to share what’s worked for you in the comments section below!

4 thoughts on “Finding Jesus in Disney Pixar’s Inside Out: A New Way to Talk to Kids about Christ”

Dish It Out Cancel reply

Follow Give Us This Day Our PBJ on WordPress.com